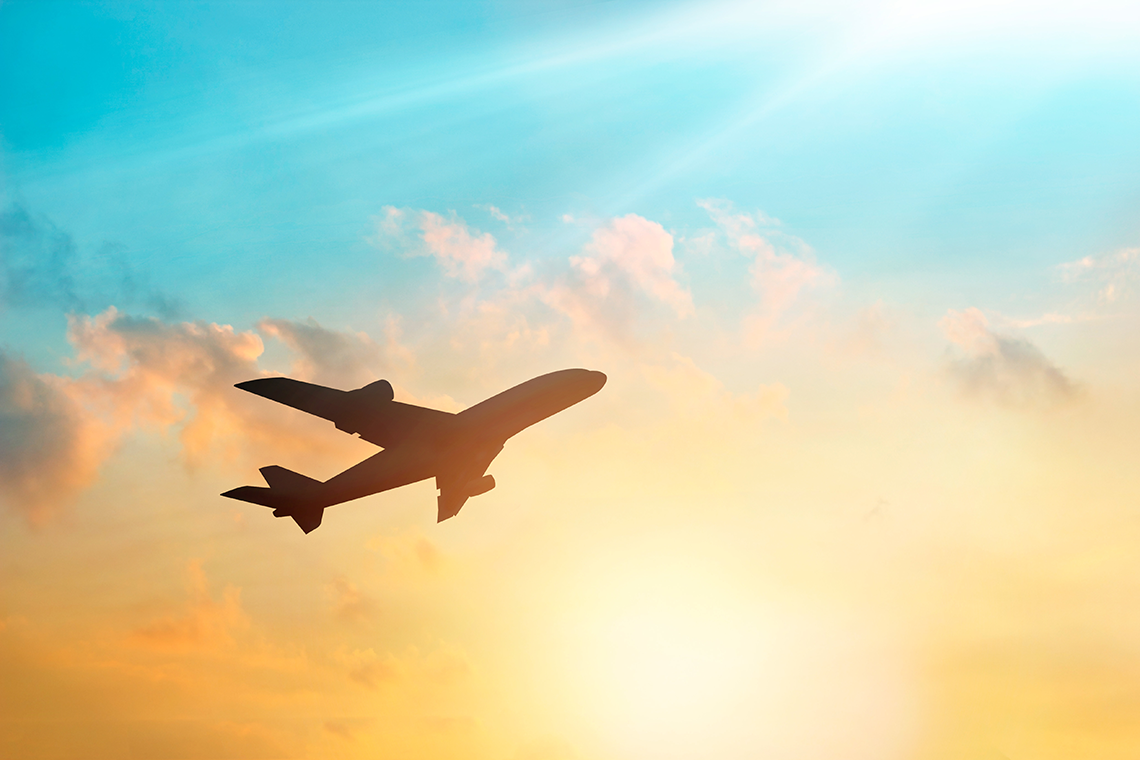 Everyone has a horror story when it comes to flying.  Lost baggage, delayed flights, and rude passengers are some of the things people love to rant about online when they express their dissatisfaction.

It’s an industry that typically nickel and dimes you on every little thing. You need to pay extra for baggage, extra for food, extra for insurance and don’t even get me started on the change fees.

It’s an industry that the consumer has to tolerate because there really aren’t any alternatives. Sure, some airlines seem better than others, but at the end of the day many of the challenges travelers face are the same, regardless of airline choice.

I fly quite frequently for business and as such, I have a little bit of “status” with Air Canada because I usually fly business class. On a recent trip, I decided I wanted to leave early and went online to see if there was an option to change my ticket.

Of course, I expected there to be a change fee. That was a given, but what I didn’t expect was to be treated so poorly for asking one simple question.

Jump back to a few weeks earlier, I had to cancel two flights that I had booked for my husband, and rebook one of the flights for myself.  When I canceled the two flights, I was issued a fairly large airline credit. I’ve never used my airline credit before so this time when I wanted to leave early, I thought I’d call in and see if I could use my credit towards my change fee.

I have a credit, I owe you money…shouldn’t I be able to use it? That’s how it works in most retail businesses when you buy something.

I called Air Canada’s customer service line to see if they could help me and no surprise, there was high call volume.  I opted to have them call me back and when they did, I could hear the rep in the background talking to someone else. She sounded distracted, and almost annoyed when I started talking to her. I quickly explained what I wanted to do. (Secretly, I was hoping that she would be nice enough to make the change for free, but fully expecting that I would have to pay for it).

What happened next astonished me.

When I asked if I could use my credit, she practically yelled at me, “No, you’re already getting a credit because you’re changing your flight.”  The tone of her voice was rude, she made no effort to explain to me how credits work, and instead left me feeling very annoyed by the way I was treated.

To make a long story short, after she rudely told me everyone has to pay, you can’t use your credit and I deal with this with “super elite” people every day, I hung up. 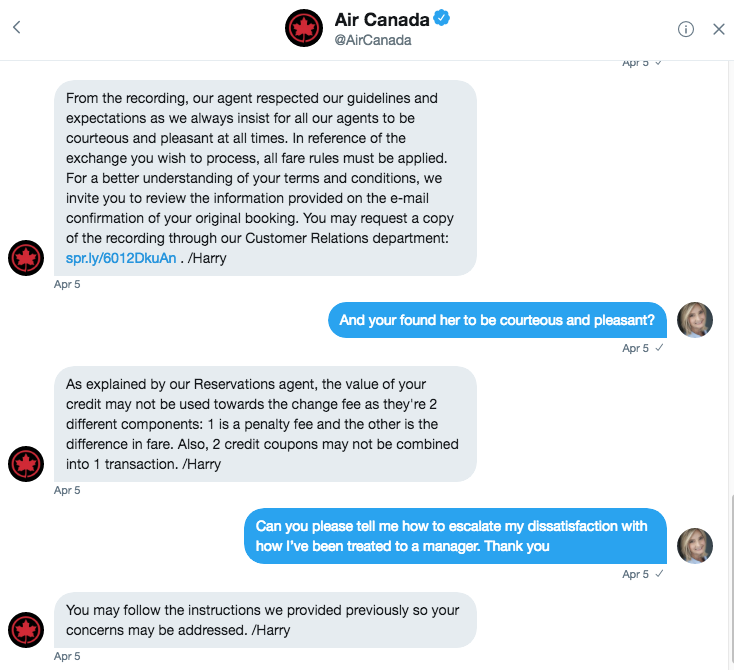 I tweeted my dissatisfaction and quickly Harry came to my aid…until Harry became rude and unsympathetic via direct message. (Not publically, of course).

The bottom line was that it seemed no one thought they could explain to me nicely that you can only use your credit from a canceled flight on a full fare ticket. If someone had taken the time to simply explain that, instead of being haughty, short tempered and rude, I wouldn’t have been so upset.

I spend quite a bit of money as a customer of Air Canada. I expect to be treated with a tiny bit of respect when I interact with customer service, whether on the phone or via Twitter.

When I asked how I could escalate my concern and get a recording of my conversation, I was directed to a link on their website.  I filled out all the information about my concern and to my absolute amazement, I received an email that told me that it would take 30 days to get back to me.

How on earth is it possible in 2018 that a company this size can get away with treating their customers this way?

Here’s the lesson for you:

Communication in your business matters.

You can deliver bad news in a kind and supportive way and educate your customers, without causing them to feel stupid, unvalued, or underappreciated.

Timeliness matters. Taking 30 days to get back to an upset customer is completely unacceptable. Deal with customer issues promptly so your customers have a positive story to tell instead of a blog about how you failed.

Respond quickly and be nice, even when your customer asks to do something that can’t be done.

Is poor customer service something you experience more often with larger companies or smaller companies? How do you deal with it?

P.S. In case you’re wondering, it took longer than 30 days to receive a simple apology email and they refused to give me a copy of the recording of my conversation.

2 thoughts on “Bad Service is Worse Than Bad News”

PrevPreviousA Royal Pain in the Back
NextCreating Defining MomentsNext