Are you able to listen to someone else’s point of view when you’ve already formed an opinion on the matter?

Have you ever made a mistake and felt the burden weighing heavily on your heart? You know you need to say something but it’s hard to find the courage to start? You’re a tiny bit scared that things won’t go the way you’d like?

This happened to me a few weeks ago while I was on a call with Sandra on my team. In a clumsy and awkward way, I told her that there was something I needed to tell her.

I simply said, “I’m sorry I didn’t believe you.”

And then, she cried.

I was guilty of being the worst boss ever.

Every single day, we let our own bias, assumptions, opinions and beliefs get in the way of listening - really listening to what other people are saying. #Leadership #LeadWell #Listen Click To Tweet

You see, last year when Sandra was managing our Done For You Marketing team, I made some assumptions about her experience and ability. I am sharing what happened with you in hopes that it helps you to be a better leader than I was.

Sandra managed our Done For You Marketing team for a couple of years. She is a dedicated, hard-working member of our team, and she is someone who likes to have time to think deeply and process information.

She’s not a fast thinker. She’s a slow thinker, and if you think slow thinking is bad, listen to Puzzle Rush and the Tortoise and the Hare on Revisionist History by Malcolm Gladwell. You’ll quickly learn why slow thinkers win the race almost every time.

In any case, Sandra had been saying she needed help to manage the volume of work we have.

And well… being a lousy leader, I didn’t believe her.

I made some assumptions about her experience and thinking style and applied them to her leadership style which was wrong.

I thought we needed a manager with more multitasking experience: someone who has eyes in the back of their head, who loves to juggle balls, a high sense of urgency and thrives under the pressure of getting it all done.

Now, let me be clear – Sandra was (and still is) a highly-valued member of our team.

In addition to managing our team, she has a passion for copywriting.

So, yes, go ahead and judge me even more. I deserve it.

Sandra was trained by Ray Edwards (yes, the famous copywriting Ray Edwards). Late last year, she asked if it was possible to change her role and work on copy and content marketing full time instead.

She felt her skills would be better put to use there.

Leadership is listening to the solutions your team brings to you.

Then, six months later, that new manager came to me and said, “I can’t do this, there is too much work.”

It was worse than that. 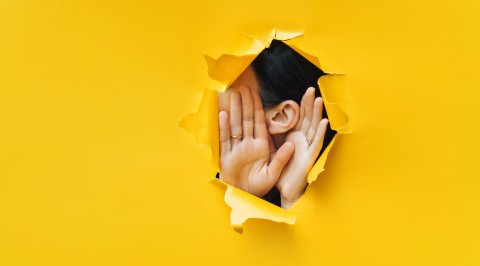 Not only did she say there was too much work and it was crazy stressful, but she wanted to quit.

She was telling me the exact same thing that Sandra said – except, this time, I was listening.

I knew I had to act fast if I was to be believed.

Immediately and rapidly, I made significant changes in the business. We hired extra people, promoted someone to an assistant to help her, and then…

I had to apologize to Sandra.

She needed to know that, as a leader, I had failed to listen to her. I had made assumptions, and I was wrong. She 100% deserved to hear that from me.

Why am I sharing this with you?

Because every single day, we let our bias, assumptions, opinions and beliefs get in the way of listening – really listening to what other people are saying.

It doesn’t matter if it’s about business, race, religion, politics or even face masks – we all need to listen better.

This is a perfect example of why.

Thank you Sandra for having more faith in my leadership than I deserved, and for saying yes to sharing this story.

Are you able to listen to someone else’s point of view when you’ve already formed an opinion on something?