We bought a piece of fake grass for the boat so that the dogs could relieve themselves while we were out on the water. Before taking them out on the boat, I placed the grass outside, on real grass so they could get used to it.

Sunshine used it almost immediately. She’s extremely smart, adapts easily and listens to commands about where to “go pee” with relative ease. One time when we were at a hotel, I even put her in the shower and told her to go, and she listened! There’s a level of safety that she feels around humans because she has never been abused.

Eddy, however, had a very different life.

When he was a puppy, he lived with a family that beat him and he was eventually returned to the breeder for attempting to bite this family’s grandchild. While I don’t have all the facts, I suspect he was afraid of the child, nipped at her and got the beating of his life, which in turn, created more fear.

When we first got Eddy, you couldn’t pet him without him cowering. He was more than hand shy—his whole body would cringe towards the ground in fear of what that hand might do.

He did not start out in a safe, loving and trusting environment and…there was no way he was going to pee on fake grass.

Eventually, the time came to spend the night out on the boat. We were concerned about Eddy, but assumed eventually he would go.

The grass had to smell safe, Sunshine was using it regularly yet over and over again, he refused to go.

It was getting late, and we wanted to go to bed. We took both dogs out to the “grass” and Sunshine did her business immediately. As soon as she stepped off of the grass, Eddy cautiously sniffed, raised his leg and followed suit.

Sometimes, when it comes to learning how to do something new and you are feeling a bit unsure or unsafe, it helps to see someone else go first. Read more: Click To Tweet

Sometimes, when it comes to learning how to do something new and you are feeling a bit unsure or unsafe, it helps to see someone else go first. 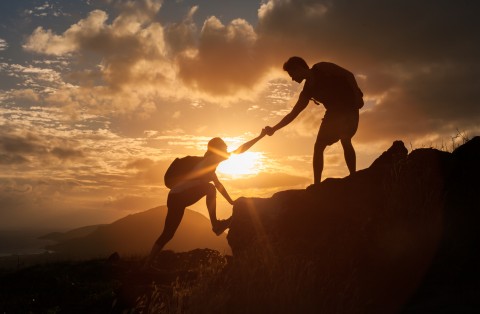 It doesn’t matter if you’re a dog, or a human—having your BFF, a colleague, or your business coach model how to do something can make it less intimidating for you.

Next time you find yourself waiting, refusing to try, even though you really want to do something (I know Eddy had to go!) borrow some courage and potential from someone you know.

After all, if they can do it, so can you! This applies to much of life—if something is possible for someone else, it’s possible for you, too.

Next time you find yourself waiting or refusing to try, even though you really want to do something, borrow some #courage and potential from someone you know. Read more: Click To Tweet

As I look back on the launch of my podcast, She Talks Business this week, I’d like to thank three women who “did it first” who inspired me to finally take action.

If you haven’t listened to the show yet, you can check out the most recent episodes, here!